Sacred geometry is geometry used in the design of sacred architecture and sacred art. The basic belief is that geometry and mathematical ratios, harmonics and proportion are also found in music, light, and cosmology. This value system has been found even in human prehistory and is considered by some to be a cultural universal of the human condition. Sacred geometry is foundational to the building of sacred structures such as temples, mosques, megaliths, monuments and churches; sacred spaces such as altars, temenoi and tabernacles; meeting places such as sacred groves, village greens and holy wells and the creation of religious art, iconography and using "divine" proportions. Sacred geometry-based arts may also be ephemeral, such as found in sandpainting and medicine wheels. 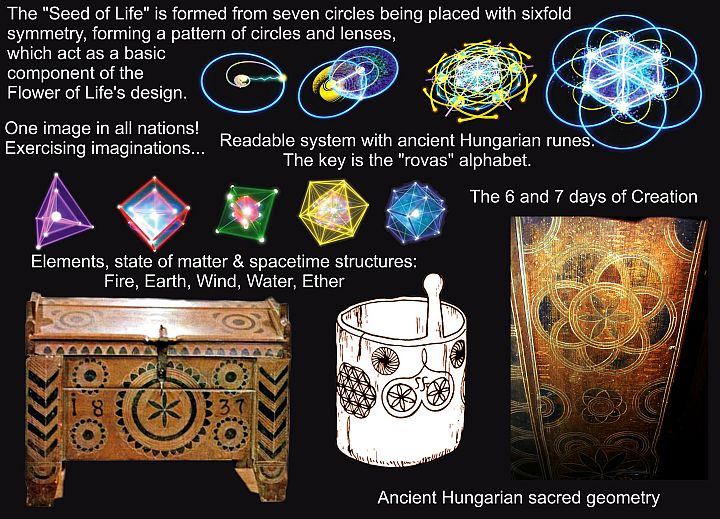 You can read the symbols of the Creation by the ancient Hungarian runic alphabet: rovas.

The reading of the first day is "so good" (there is no evil at that time). - Oly Jó. The golden ratio spiral is the letter "O". The circle with the seed is Ly, pronounced J. 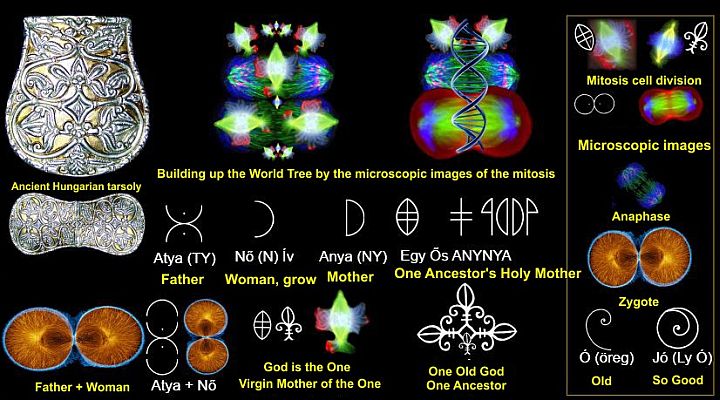 Secrets of the Hungarian language and symbology

Every ancient root word has images. Using images and words in the same time activates the World Tree. The Tree of Knowledge and the Tree of Life together means the left and the right side of your neuron web. This is a holy 3 system with the middle (enkephalos)...

The Seed of Life is formed from seven circles being placed with sixfold symmetry, forming a pattern of circles and lenses, which acts as a basic component of the Flower of Life's design.

The Flower of Life is the modern name given to a geometrical figure composed of multiple evenly-spaced, overlapping circles, that are arranged so that they form a flower-like pattern with a sixfold symmetry like a hexagon. The center of each circle is on the circumference of six surrounding circles of the same diameter. 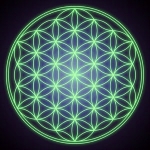 It is considered by some to be a symbol of sacred geometry, said to contain ancient, religious value depicting the fundamental forms of space and time. In this sense, it is a visual expression of the connections life weaves through all sentient beings, believed to contain a type of Akashic Record of basic information of all living things.

There are many spiritual beliefs associated with the Flower of Life; for example, depictions of the five Platonic Solids are found within the symbol of Metatron's Cube, which may be derived from the Flower of Life pattern. These platonic solids are geometrical forms which are said to act as a template from which all life springs. (source: wikipedia)

There are precisely five Platonic solids (shown below):

Where music and ancient knowledge meets